As I’ve mentioned before, there are a number of indicators that during this recession customers are trading downwards.  What can you do to align yourself with this trend?  If you look closely, you’ll see how you can take advantage of it so that you do two things:  keep your low-end customers from trading down to a competitor, and capture new customers trading down from a high-end competitor.

In an article in today’s Wall Street Journal, John Stoll and Alex Kellogg noted that sales at the Big Three automakers plunged to the lowest levels in decades.  While the declining numbers are significant, there are some hidden insights.  If you look at the following chart, you’ll notice that with the exception of BMW, the more expensive brands suffered while the less expensive brands either suffered less or actually grew during an abysmal sales period. 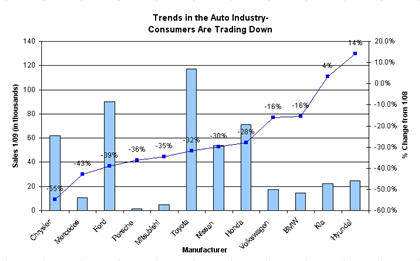 The vertical bars represent January sales and the solid line indicates the percent change since January of last year.

Kia and Hyundai grew.  Volkswagen suffered less than many.  The two companies that defy the trend are Mitsubishi and BMW.  I’m not sure why Mitsubishi would suffer, unless they’ve pulled back on their advertising and are being drowned out by massive promotions by the Big Three.  As well, I cannot explain BMW’s moderate loss compared to Mercedes.  BMW has historically been less affected by such swings.

What would be even more telling is to look at the same numbers for brands within each manufacturer’s portfolio.  I predict that the flight from high-priced luxury trends towards lower-priced economy cars would be even more pronounced in that analysis.

How are you going to help keep your customers from trading downwards from your Toyota equivalent to the Kia equivalent?